Twister2 supports a DataFlow model for operators. A DataFlow program models a computation as a graph with nodes of the graph doing user-defined computations and edges representing the communication links between the nodes. The data flowing through this graph is termed as events or messages. It is important to note that even though by definition dataflow programming means data is flowing through a graph, it may not necessarily be the case physically, especially in batch applications. Big data systems employ different APIs for creating the dataflow graph. For example, Flink and Spark provide distributed dataset-based APIs for creating the graph while systems such as Storm and Hadoop provide task-level APIs.

We support the following operators for batch and streaming applications. The operators can go from M to N tasks, M to 1 task or 1 to N tasks.

The batch operators work on set of input data from a source. All this input data will be processed in a single operator.

We support both streaming and batch versions of these operations.

Since this reduce is taking place in an distributed environment the same function needs to be applied to data that is collected from several distributed workers. Which means there is a lot of communications involved in transferring data between distributed nodes. In order to make the communication as efficient as possible the reduce operation performs its reduction in a inverted binary tree structure. Lets look at a more detailed example to get an better idea about how this operation works. Please note that some details will be left out to simply the explanation.

In this example we have a distributed deployment which has 4 worker nodes named w-0 t0 w-3. The reduce example that we are running has 8 source tasks and a single sink task (the task to which the reduction happens). The source tasks are given logical id from 0 to 7, the sink task is given a logical id of 8. 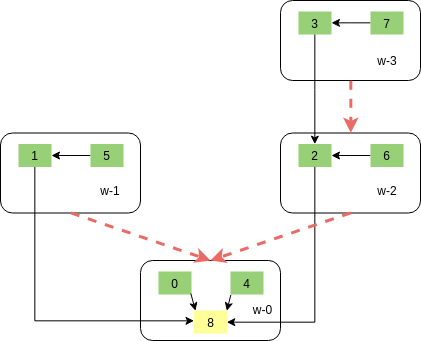 If you look at what each of the tasks that actually send messages to sink 8 they would be as follows. Notice that the results are similar to the reduce operation.

The BSP APIs are provided by Harp and MPI specification (OpenMPI).

The DataFlow operators are implemented by Twister2 as a Twister:Net library.